Bodour Al Qasimi, President of the International Publishers Association (IPA) and Founder and Chair of the Kalimat Foundation (KF), affirmed the critical role of books in promoting cross-cultural understanding and the values ​​of peace, love and justice worldwide.

She pointed out that now more than ever, communities need to build a stronger connection to the world of books, which will help reveal humanity’s common bonds, no matter how different we may feel from others around the world, and that it will also lead to the creation of an environment that enjoys greater understanding, harmony, stability and prosperity.

This came during an event organized by KF at Romanioly Elementary School in Bologna, Italy, on the sidelines of its participation in the recently concluded Bologna Children’s Book Fair (BCBF) 2022, where Sharjah was guest of honor to celebrate the emirate’s leading role in strengthening relationships with different societies and cultures on a common human basis.

Giving children around the world better access to books and knowledge requires strategic collaboration, stressed Bodour Al Qasimi, noting that partnerships with entities in the humanitarian, cultural and educational sectors are key to implementing initiatives for children, especially those who have no access to schools and libraries. She added that books are not only a source of learning and entertainment, but also tools that build children’s confidence and allow them to believe in their abilities to create a prosperous future. 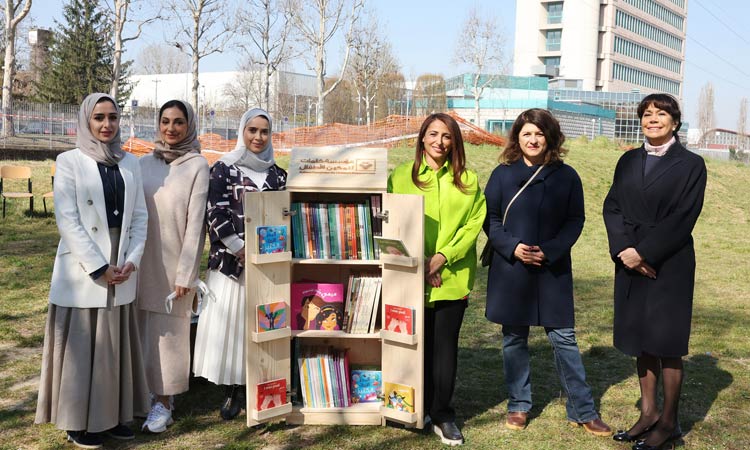 Sheikha Bodour poses for a photo with dignitaries.

As part of its Pledge a Library initiative, KF offered the primary school a mobile library of 100 books, comprising a selection of Arabic and Arabic-Italian titles, gifted to the students by renowned Italian children’s author Elisabetta Dami – creator of the Geronimo Stilton children’s book series. The move aims to enrich the school’s library with new literary sources.

One of the activities organized at the school was a storytelling session where Bodour Al Qasimi and Elisabetta Dami read the Kalimat Group’s books Close to home History in Arabic and Italian for young listeners.

The Foundation also highlighted his Pledge a Library initiative, the has donated 2,000 Arabic and Arabic-Italian bilingual books of various genres and interests, as well as 13 libraries. Of these, 11 libraries were donated in 2019 and two more in 2022 across Italy young Arab immigrants and refugees in the country.

Amna Al Mazmi, director of KF, noted that strengthening friendships with people suffering the trauma of displacement through books is part of the nonprofit organization’s strategy to support young Arab refugees cut off from their homes and nation , and to help them learn and appreciate theirs native language and their culture while integrating into their host communities. She added that the foundation’s efforts are aimed at building a generation whose achievements will benefit all of humanity.

The foundation’s pavilion at BCBF 2022 welcomed children’s book professionals, librarians, and officials from educational, cultural, and humanitarian organizations to learn more about its mission, goals, and programs. The visitors took the opportunity to explore ways they can contribute to the Foundation’s efforts to support children and young people who do not have access to schools and libraries in their countries and emphasized that protecting children and their education is the vision of a common global goal.

Since its inception in 2016, KF has supported 155,749 young readers in 25 countries across Asia, Africa, Europe and South America through a range of initiatives to bring refugee children and young library visitors closer to books, in line with its vision to preserve the Children in affected communities have rights to access books and help build an educated and conscious Arab generation.